The smallest castle in the Netherlands

Hattem Castle, the smallest castle in the Netherlands, is hidden in a Roermond city park. We took over the Kasteeltje in 2004 and after a thorough restyling we started in December of that year.

In the castle  is a stylish restaurant for lunch and dinner with surprising dishes with a modern twist on the menu. For lunch we have an lovely small menu, but can also be chosen from the menu. In 2017 we built a new conservatory, with a lovely view of the garden.

We use the cozy little conservatory at the intimate bar for breakfast, but we also serve lunch and dinner. This is also a nice place for aperitif, good glass of wine or Champagne or just a cup of coffee.

In the garden you can enjoy the centuries-old trees with a view of the garden and sometimes you can see our piglets Luuk and Bacon.

We are open every day for lunch and dinner, except on Sundays. We also have possibilities for meetings, culinary dinners and cozy get-togethers. The eight comfortable hotel suites in the former coach houses are spacious and contemporary furnished.

The combination of a centuries-old building, a contemporary decor, cosiness and high service makes it feel like at home!

We also hope to welcome you soon as a guest of Kasteeltje Hattem. 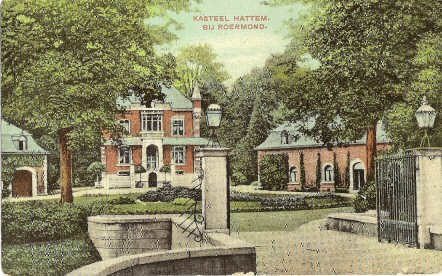 City park Hattem of Roermond lies on the southern edge of the city, in the Roer valley and the Hambeek a branch of the Roer. De Roer has a clear stamp on the entire park, the bottom consists of river clay and this is a fertile type of soil for the rich number of poplars, beeches, oaks, nuts and plane trees.

In the park Hattem lies the Castle of Hattem, the smallest castle in the Netherlands, formerly written as Hattum. Relatively little is known about the history of the castle with the city archivist.

The oldest history of the estate dates back to the beginning of the 15th century, probably in the forest on the bank of the Roer a residential tower was built as the earliest precursor of the current castle. The current form of the castle dates from 1718. The house was called Horst in Roerbosch. The builder was the Holthausen family. The site was in the 18th century a country estate where the farm "Roer" was located. The country house, also called the smallest castle in the Netherlands, has an irregular moat formed by a pond, which is surrounded by a geometric lane system in the shape of a fork.

Striking is the inclined arrangement of the coach houses in relation to the castle. 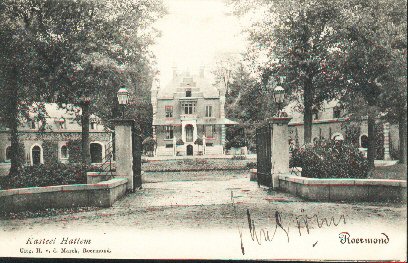 Castle of Hattem history In the 19th century the family Michiels van Kessenich became the owner. In 1954 the Municipality of Roermond bought Kasteeltje Hattem. It was then very dilapidated, because after 1944 many political prisoners and returnees had lived from Indonesia.

In 1962 the park got the current layout, when the new Maasbrug was opened with an exhibition around Hattem. The lands surrounding the castle were transformed into a city park and opened to the public. The park is laid out in the English landscape style. Some trees are more than a hundred years old, such as the Oriental beech and the Sequoia Giant sequoia next to the castle.

In 1966, the internationally renowned Hammerveld Jazz Festival was organized for the first time, where the high nobility of American jazz was on stage. Later this festival became the North Sea Jazz.

The first catering operator was Mr. Eric Klinkert, he opened in 1975 "Tap and Roosterplaats Kasteeltje Hattem". At that time the castle was plastered white. 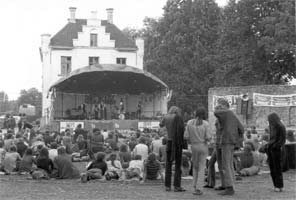 Since 1988, the National Indies Monument has been established in the park and expanded in 2003 with the UN's monument for Peacekeeping Operations. During the commemoration of war victims, 10,000 veterans come every year in September with their relatives.

In 1989 the castle and the accompanying coach houses were thoroughly converted into a restaurant and hotel, later the small and large conservatory were added.

In December 2004, the current owners gave the Kasteeltje a contemporary design. Today it consists of a stylish restaurant for lunch and dinner, 8 comfortable hotel suites and extensive options for many business and festive occasions.